This location is a dancer's dream!

Back to Dance Class

For Intermediate and Advanced Dancers

It is with great excitement I am inviting you to a very special event!!

On December 19 we are going to finally get together in our lovely dance community!

We are meant to be transforming right now. There has never been a more important time to find our gifts, deal with our shadows, and follow our inner wisdom. Life has never before required us to transform so quickly, and the best way to do it is DANCE!

THE PROGRAM WILL HELP YOU:

WANT TO TRY BEFORE REGISTRATION? 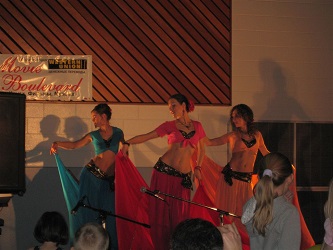 Eastern Dance Studio was founded in Calgary, Alberta in 2007 by Galina Busova. The intention was to create a community of kindred spirit women to grow together in the Art of Belly Dancing.

The first class was held at the School of Alberta Ballet. It was a group of enthusiastic Russian-speaking women who were exited to get together, learn some belly dancing and, of course, chat on their native language.

Pretty soon our group was invited to perform at the International Women's Day Show. For this show Galina has created her first choreography Flamenco Flavoured and learned it with the girls. The first experience of dancing on the stage was stunning! Everybody enjoyed it!

At the same show on Galina has presented my solo choreography Emerald Forest. She danced it with a burning candle. 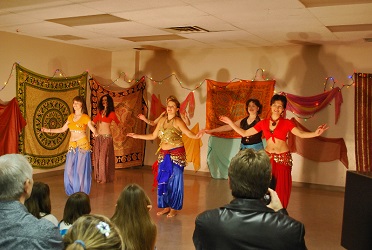 In January 2008 the Studio presented the first students recital. In a warm family atmosphere we celebrated Christmas and New Year. Not so many dances were in our arsenal those days. Therefore, we turned our student's concert into a talent show. Our kids were entertaining the audience while we were changing costumes. The hit of the night was fun and srarkly dance "The Beauty".

That year Eastern Dance Studio started to participate in the cultural events organised by Calgary Folk Counsil.
We performed at many events held by this enthusiastic people: International Dance Day, Heritage Day Festival, Greek Festival, and many others. 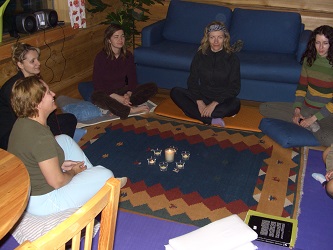 The next memorable event in the Studio happened in June 2008. It was a workshop-reatreat "Listen to your body". At the peaceful mountain surroundings of Golden, BC, we were meditating, dancing, playing, doing yoga, walking, and even swilling. the goal of the workshop was to get a deeper connection to our own bodies and souls.

At this point our group began to grow. Dancers started to bring their friends who didn't speak Russian. Galind had to switch from Russian to English all the class, and gradually English became a primary language of instruction.

In September 2009 Galina gave birth to her third son, Roman, and there was a break in classes and performances.
In January 2010 everybody were happy to be back to dancing. 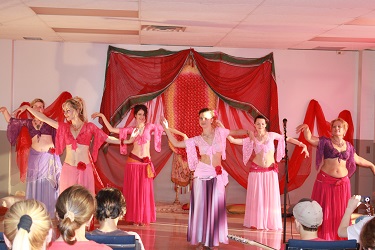 At our next Student's show during the Summer of 2010 we danced several new choreographies. One of them, Desert of Roses, is still performed by our beginners group.

On that memorable show many students debuted as solo dancers. Presenting a solo dance requires lots of courage and diligence. It is a great challenge even for an experienced dancer let along a beginner to get up on the stage all alone.

All the dancers participated in the workshop "Dance Craft' lead by Galina Busova. Every single component of the dance from the costumes to the choreography was created by the students themselves. The dancers were searching for the image they were going to create. They were exploring improvisational dance to expand their movement repertoire, and then learned the methods of expression through dance and movements. The result was fascinating! Seven absolutely unique dances! 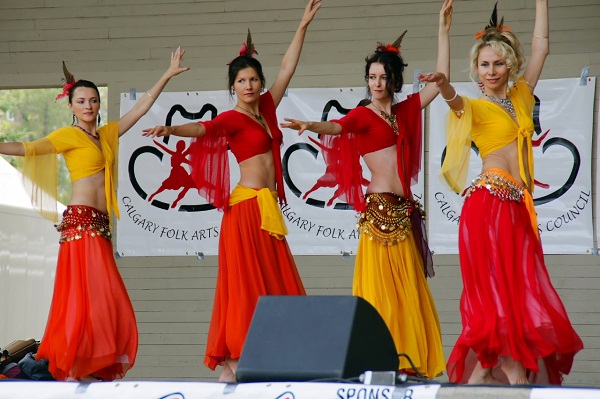 Another choreography debuted on that Summer show was Fire Dance. Later, it was presented by out Performance Team it at many events.

Our performances became more frequent: we have been regular participants of many cultural events around the city.

Since 2010 we've been dancing at the Chinese Cultural Centre. Every Thursday night we come here to learn the art of belly dancing.
In the class we pay attention to all aspects of this ancient art: the theory, the practice and the heart. The heart of the dance is open through improvisation. It is a source of courage and inspiration that provides an opportunity to discover ourselves on deeper level.

The practice take lots of time and efforts. Every class we start with drills. Multiple repetition of a certain movement creates muscle memory when this movement actually becomes so natural for your body that it can be performed without thinking about it.
With a certain intention and understanding of a dancer belly dancing has a potential to transform her life significantly. To witness this transformation in yourself and in others is an invaluable gift. In the class we often use a circle formation as it is associated with the idea of protective circle for all the members of the group. 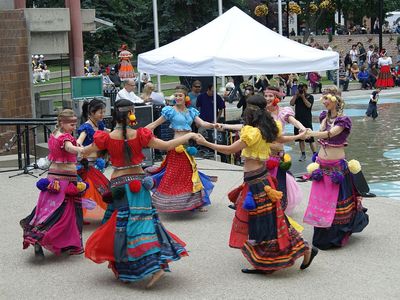 On our 5th Anniversary celebrated at the Cardel Theatre  we presented one of our favourite choreographies "Pelageyushka".

We have always wanted to make a dance in which the movements of Russian Folk Dance would mix with Tribal Fusion Dance. That's how the idea of a dance with Russian Music was born. For this we have chosen the composition of a Russian folk-rock singer Pelageya, called Pelageuyska – the Siberian Drive. Part the of the song is performed in Algerian.
Then, the question of costumes arose. The elements of traditional Russian and Tribal Fusion costumes had to be implemented. This was not something you could buy we had to make it on our own. So we rolled our sleeves and did it!

Sinse than this choreography is in bid demand. We danced Pelageyushka in many folk festivals, fundraising, cultural events, and even in the Church for "Christmas in Bethlehem" in Bow Valley Church. 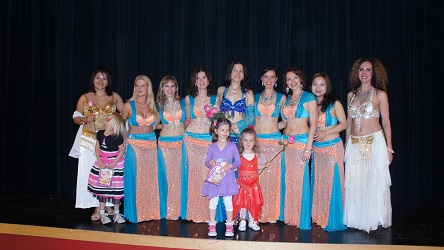 In addition to all the performance where we are invited, every year we hold two Studio events: Christmas/New Year Party and Year-end Students' show. In June of 2014 we created a Belly Dancing Fairytale "Once Upon a time" - the story about a dream coming true. The finale of the show, "Dancing with the Muse" was spectacular!

This location is a dancer's dream!

Back to Dance Class

For Intermediate and Advanced Dancers

It is with great excitement I am inviting you to a very special event!!

On December 19 we are going to finally get together in our lovely dance community!

We are meant to be transforming right now. There has never been a more important time to find our gifts, deal with our shadows, and follow our inner wisdom. Life has never before required us to transform so quickly, and the best way to do it is DANCE!

THE PROGRAM WILL HELP YOU:

WANT TO TRY BEFORE REGISTRATION?